W6: Out of the Gloom of Despair 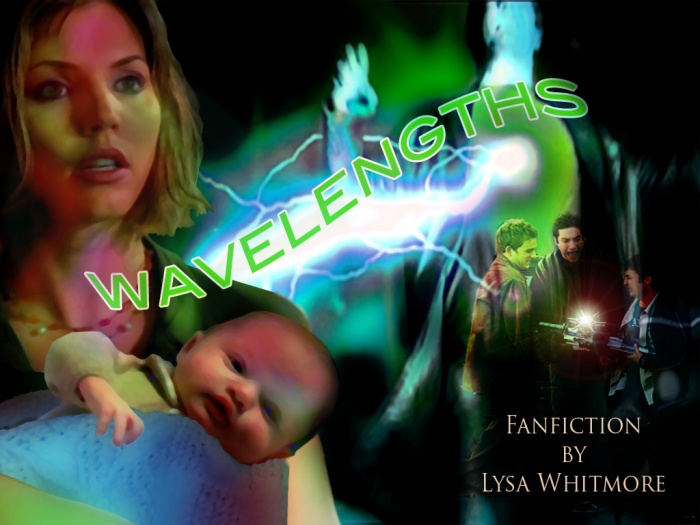 Destiny or chance
Bounding to its pinnacle
To be acknowledged

A heart reaching out
Offering tokens of trust
Seeking a return

If the van had been a jumble of computers and gizmos, the Geek Trio’s basement lair was ten times worse. Not only was it crowded by electronic devices and strange gadgets, but it was decorated in a hodgepodge theme of every science fiction movie from the past fifteen years. Action figurines held places of honor amongst the dust-collectors Cordelia classified as junk.

Setting Connor down in the carrier she’d insisted they bring along, Cordelia glanced around at the corner of the room she currently occupied. Andrew stood guard, his arms crossed over his thin torso as if he was one of the action figures from their collection. He looked like she could take him out with a swift kick in the right spot. Unfortunately, they weren’t alone.

Warren and Jonathan were busy at the worktable across the room going over their ray gun and muttering about the fact that it had overloaded back at the Hyperion. There was no way to get past them and up the stairs with Connor.

Her eyes fell upon a large white board in the center of the room, set up in front of three recliners. Colorful ink outlined THE PLAN with a mix of diagrams and a partially ticked off list of things to do. Already crossed off were: Conduct Slayer Testing, Design Weapon, Infiltrate Museum Security, Steal Diamond. There was an added note on the side: Hypnotize Buffy, along with some scribbling in some other handwriting reading Buffy = Sex Bunny.

Cordelia snorted at the image in her head, but realized quickly enough that Warren, sleazoid that he was, seemed to have her in mind as a substitute. That was just… beyond eew!

No matter how moronic these genius nerds actually seemed, the fact was that they’d managed to pull off some of the things on their list. The rest of their ambitious plan included: Steal Baby; Create Online Auction Website; Sell Baby & Get Rich; Kill Slayer (If We Can’t Hypnotize Her); Take Over Sunnydale; Girls, Girls, Girls.

“So that’s the weapon from your list. You needed something powerful enough to hurt Buffy,” Cordelia commented trying to draw Andrew into conversation. She managed to get Warren’s attention as well.

Warren glanced over his shoulder, pausing in his work as he and Jonathan examined the inner workings of the ray gun. The overload had caused some changes fusing a few of the electronic pathways. Always willing to talk about his own expertise, he did not even give Andrew a chance to respond.

“Your boyfriend was a guinea pig,” he explained without a shred of real sympathy to the fact. “Target number one. We didn’t have time for testing on anything except a few empty soda cans, so powering up enough to target someone his size caused an unexpected overload. It didn’t hurt for very long.”

“Like that’s such a comfort,” Cordelia snapped, pain and anger welling up inside her until she could no longer hold it back.

Why was it only now that he was gone that she understood how much Angel meant to her? That it took death and disaster to clear her mind of the veils of denial hiding the truth. That the reason she’d reacted to Darla’s presence, to her pregnancy and to Angel’s lie had been about far more than feeling betrayed by a friend. It was too late to think about the way her body tingled in response to his accidental touches during their training sessions or the way that lately she sometimes caught him staring.

Cordelia didn’t bother to hide her hatred of Warren at that moment. She only knew what she’d suddenly lost and that he was the cause. “Murdering Angel will only bring you trouble, starting with me.”

Scoffing at the idea, Warren’s dark gaze slid down the curves both accentuated and hidden by her casual clothing. He’d always preferred leggy brunettes. “We’ll talk later about what you can do to make up for shooting me in the leg.”

“Don’t even think about going there,” Cordelia wasn’t about to be intimidated by that leer or his words. Andrew and Jonathan just looked uncomfortable when faced with the reality of actually having a female present in their lair, especially her. “Go back to playing with your toys.”

“This toy will get us anything we want,” Warren told her before adding, “just as soon as I get it working again. The Slayer is the only one who can stop us and this…this… Destructo Ray has enough power to kill her.”

Cordelia rolled her eyes at his attempt at naming his invention. “Destructo Ray? Do you even have an imagination?”

The sudden sound of Connor crying distracted both Cordelia and Warren, covering up the simultaneous sound of sniggering coming from Jonathan. Andrew actually looked a little concerned, ignoring the irritation on Warren’s face which he normally would have enjoyed, and peeked into the infant’s carrier. “What’s wrong with it?”

“Connor, is hungry, dumbass,” Cordelia stressed the baby’s name. “I need to go up to the kitchen to make his formula.”

Warren didn’t want to let her out of his sight. “Andrew will do it.”

Jonathan found another source of amusement as Andrew’s face paled to an even pastier color. “How complicated can it be? It’s not like you’re titrating combustible liquids this time.”

The Chem Class experiment had literally blown up in his face, Andrew remembered. It took three months for his eyebrows to grow back.

Seeing an opportunity to get out of the basement and closer to the front door, Cordelia suggested, “Why don’t I do it. Andrew can guard me up there just as well as down here.”

Not well enough, she added silently.

With the moves Angel had been showing her, Cordelia felt certain she could take Andrew out easily enough. She just had to make sure that Connor was safe while she trampled Nerd Number Three.

Warren wasn’t quite so trusting, apparently. “Leave the kid. Just shut him up first.”

“No way I’m leaving him down here with you,” she picked up Connor carrier and all. “He’s staying with me and I’m going to fix him something to eat.”

She started moving toward the basement stairs only to find Warren and Jonathan blocking her path. Andrew was behind her, holding the bulging diaper bag that held Connor’s things. He looked back and forth between Warren and Cordelia as they faced off in a staring contest.

After a full minute, Warren nudged Jonathan with an elbow. “You go with them. Don’t let Cordelia out of your sight.”

“Dontcha trust me?” Cordelia smirked as she brushed past him following behind as Jonathan led the way up.

Warren grabbed her by the arm, jostling the baby carrier in the process and causing Connor to wail louder than before. “Try anything stupid and it’ll piss me off,” he warned in a tone that suggested he wanted the chance for some payback.

Not liking the look Warren was giving her, Jonathan called down to her from the top of the stairs, “C’mon, Cordelia. He gets cranky when his toys don’t work.”

Glaring down at the hand grasping her arm, Cordelia forced herself to stay quiet. She wanted to tell him exactly what she thought of him, but there was still a chance to escape if she made it upstairs. If she thought someone had a clue about where they were, Cordelia figured she’d relax and wait for the rescue party, but she was the only one here to save Connor.

When Warren’s hand opened up to release her, Cordelia took the stairs one by one, not once looking back despite the feeling that he was watching the sway of her hips.
Waning daylight peeped through the door as it filtered in from the hallway above. Cordelia felt her heart pounding like a hammer in her chest as she got closer to the top of the steps. Thoughts of fighting her way out of this might not be realistic when it involved two-thirds of the Geek Trio, Cordelia realized, but if the opportunity came to escape, they were going to take it.