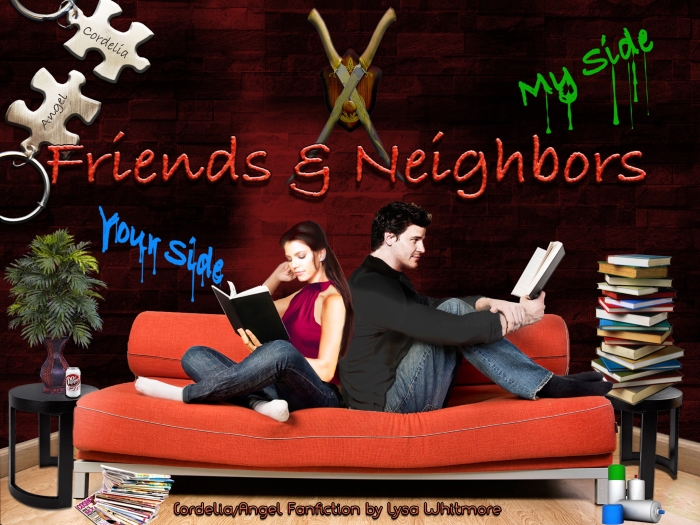 It’s Where the Heart Is

Petersen’s Fishery, located behind Steward & Westminster was constructed of brick, rusted metal and a tin roof, a perfect place to use as an off-the-beaten-path torture chamber. This section of the wharf was old and deserted with no one around to hear victims scream. Angel was no stranger to torture although he had rarely been on the receiving end. Spike’s plans came as no surprise, nor did his employment of a torture specialist like Marcus to do the dirty work.

He was also prepared for Spike to betray him once they had reached the fishery. Two against one. Better odds to get the ring off his finger. For once, Spike kept his word. They faced off against Marcus, used an item or two from his table of torture devices, and in the end left his dust swirling in the breeze.

“Been a while since we fought on the same side.” Spike kicked his boot across the dust pile for a final bit of fun before getting serious again. Angel saw that he wasn’t joking around anymore. “So we have a deal. I stay out of L.A., and you leave me be.”

Warning him that it was not quite that easy, “If you’re planning on staying in Sunnydale, Buffy will be there to keep an eye on you.”

Spike hesitated a moment before wagging his tongue lasciviously, “Maybe I plan to keep an eye on her too.”

The simple response was a multi-layered warning. It did not matter if he had ended things with Buffy. Spike was never going to be a better option, not that he liked Riley Finn any better, but at least he had humanity going for him. Spike was just trouble, especially when left to his own devices. Still, he knew Buffy could handle it.

For once, she was not his priority. “There’s no deal until I get Cordelia and Doyle back.”

Angel pulled out the small black phone and flipped it open. The last thing he needed now was someone calling about a case. Cordelia rarely ever forwarded the office phone to his number, frequently accusing him of letting all of his calls go to the endless pit of voice mails he could not figure out how to answer.

Cordelia sounded surprised to hear his voice. “Angel! Angel, are you okay? Still in Sunnydale? I have to—”

“What the bloody hell!” Spike obviously heard her too. He yanked his own cell phone out and started punching in numbers.

“—warn you. Sorry to interrupt the apocalypse, but I have the 411 on your old pal, Spike,” Cordelia huffed the words as if she was almost out of breath like she had been running. “Watch out for him. He’s—”

Behind him, Spike was giving Manny the Pig hell. “I’ll rip out your lying tongue! Drive around the bloody block and keep—”

“—looking for that ring Buffy gave you.” Cordelia went on barely allowing Angel to keep up. “Buffy did give you the ring, right?”

Angel had a second to acknowledge it, “Yeah.”

“Go invulnerability! You must be kicking some Big Bad ass.”

“Cordelia, are you okay? You sound—”

She rushed to say, “Oh, I’m fine. We’re both fine now. You just need to watch your back. Spike will probably come after you. Y’know, if you’re going to be there for a while.”

“It’s over. Sunnydale is safe for the moment,” he told her.

There was a pause where Angel thought he was supposed to say more, but before he could get out the words she asked, “Are you going to come back?”

What kind of question was that?

She had to ask?

While he was stunned at the question and half distracted by Spike reaming out his henchman over the phone for losing Cordelia and Doyle, he realized that she might have had a legitimate reason to think he might not want to return to L.A. She obviously thought he was still in love with Buffy despite the kiss they shared and the way they had grown closer over the past few months.

The phone was no place for explanations. All he could do was say, “I’m here.”

“Home. Well,” he corrected himself, “here in town. Spike and I—”

“Yeah. You’re okay?” Angel asked again needing to know that she was not injured or abused in any way. “He didn’t…”

“Toss me into a gross van with no air conditioning? Spike totally did that,” Cordelia made a noise that told him she found it icky. Hardly the worst of what he had imagined her going through. “Don’t beat him up too much before I get there.”

Angel fought off a smile as he watched Spike pacing in front of him while muttering about incompetent morons and cheeky cheerleaders. “What about Doyle?”

“He probably wouldn’t mind getting in a punch or two,” she said, and he could practically hear the smile over the phone. “We’re at his place. Smells like bong water, but it is safe for now. We kind of rescued ourselves.”

That was his fault for not being there, Angel realized with a stab of guilt.

“Doyle is surprisingly good at getting out of restraints,” Cordelia added with a laugh. “I’ll tell you all about it later if it’s okay to come back.”

Angel explained that Spike would be leaving shortly, but did not get into the details of their deal. He wanted him out of his sight so that he could check on Cordelia and Doyle for himself, and verify with his own eyes that they were unhurt. He had missed seeing them everyday. They were his friends and he wanted them safe.

His throat tightened up as he told her, “See you at home,” because he was not completely certain he could put up with a conversation. Not when all he wanted was to take her to bed and keep her there replete with pleasure to the point that she would never want to leave him.

“Guess that’s my cue to get going,” Spike told him as soon as he ended the call. “One little problem there. My ride is parked a couple blocks away from your building. Got in through your sewer entrance last night. Don’t s’pose you’d give me a lift?”

The sun was still shining outside. Although the shadowy box canyon of buildings along the wharf prevented Spike from burning to a crisp between the car and the fishery entry, it had not been a comfortable ride from the office being bundled up under a blanket.

Angel did not want to subject himself to any more of Spike’s tales about Sunnydale or his run-ins with the Slayer or her posse of do-gooders. “We part ways here.” He strode over to the Plymouth and let the top roll back to full convertible mode. “The sun is still up. I’m going to enjoy it.”

Standing just inside the shadowy entry of the doorway, Spike seethed a bit. “Love to rub it in, don’t you? Our deal stands. Ride off into the sunset if you want, but don’t get too happy. Whatever you’ve got going with the Cheerleader, don’t screw it up, or make me regret giving you that ring.”

“Our deal stands. Stay out of my business and I will stay out of yours. Cordelia is off-limits.”

Spike scoffed at those words twisting them back at him, “Take your own advice on that one. Don’t get careless with that ruddy soul of yours. Lose it and she’ll be your first victim.”

The thought sickened Angel mainly because Spike was not wrong. The ring was the source of powerful magic, but could it really protect his soul? As much as he did not want those doubts to surface, he could not deny that they existed.

Angel took hold of the rusty stair rail jumping over it in an easy leap to stand directly in front of Spike. “The ring is no longer your business. This city is mine,” he bit out the words. “Don’t ever threaten it or my people again. Next time there won’t be any deals. I want you back on the road at sundown.”